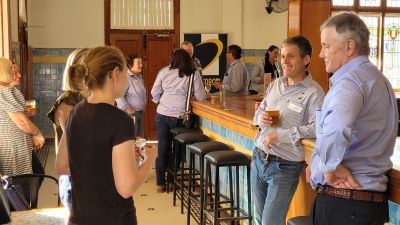 Meetings are one thing: a chance to talk strategy, set policy direction, and challenge who we are and what we do for our members and the wider agriculture community.

But it’s what happens after the meetings, the time spent round the barbie – a plate in one hand, a drink in the other – where, in my view, our best work is often done.

Last week in Charleville, we did both – as we sought to build strong cohesive foundations for AgForce during the next 12 months, strengthen strategic ties with individuals and other organisations, and engage with locals and community leaders to enhance collaboration in the State’s southwest.

For three days our cane, cattle, grain, and sheep & wool boards, our various committees, and our Young Producers’ Council – more than 70 AgForce elected representatives and staff – set about challenging the effectiveness and efficiency of everything we do.

Southwest Queensland is a unique part of our country with conditions unlike those found in many other parts of the world, so it was fitting our main industry update featured a landscape conversation that included the Statewide Landcover and Trees Study (SLATS) process, the Vegetation Management Act, trigger mapping, and natural capital.

AgForce policy staff, committee members, and industry experts also spoke to an audience of more than 100 local producers about our GIS mapping and land valuation services, AgCarE – AgForce’s program that strengthens our move toward a natural capital approach – and drought reform.

Australian Farm Institute Executive Director Richard Heath provided the keynote speech, on the thought-provoking topic: The future of agricultural representation – a subject worthy of reflection for a member-based organisation like ours.

But it was Charleville itself and the farmers who have made their home there that the week was really all about.

It was Charleville where we met to listen, to learn from each other, and to find ways to build on the quality and frequency of the opportunities we continually seek to create for AgForce members, and for all rural producers in the southwest and beyond.