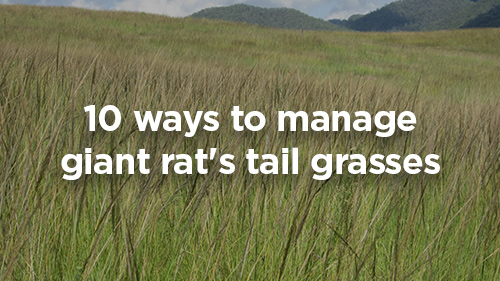 Giant rat’s tail grasses (GRT) are invasive grasses that can reduce pasture productivity, out-compete desirable pasture grasses and cause significant degradation of natural areas. They are often referred to as weedy Sporobolus grasses. GRT has low palatability when mature, difficult to control and can quickly dominate a pasture, especially following overgrazing or soil disturbance. Cattle health and productivity (including finishing times, weaning percentages and weights) can be affected.

Four species of introduced Sporobolus grasses are invasive plants in Queensland. These are declared as Restricted Matter under the Biosecurity Act 2014. Everyone has an obligation to minimise risks of transporting, growing or spreading these rats tail grasses:

Biosecurity Queensland is helping improve our understanding and management through projects investigating:

10 things you can do now to manage it

While there is still no silver bullet for GRT, here's how you can manage it: